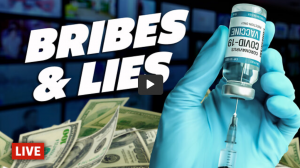 A frightening list of Pfizer vax side effects was recently leaked, and the media was silent. But they weren’t just silent—they also continued to push the jab as entirely safe and effective. Why are they knowingly lying to the American public? According to information obtained by Blaze Media, news companies (including FOX and Newsmax) have taken large amounts of money from the government to push a deceitful narrative about COVID vaccines.