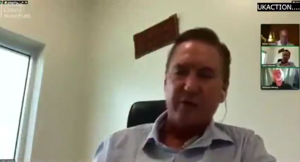 Some data I had not seen elsewhere.

You may have seen a video made a few years ago of Bill Gates presenting to CIA personnel about the prospect of vaccinating against religious belief, religious fundamentalists he called them. If you haven’t, here it is: https://www.youtube.com/watch?v=N9hUDEjLEfk Well starting about the 50 minute mark in this video Todd talks about CRISPR gene editing/deleting technology in the Covid shot and the number one common effect from the Pfizer jab being that coming from the likely deletion of the 1p36 gene ( https://medlineplus.gov/genetics/condition/1p36-deletion-syndrome/) the lack of which causes intellectual disability, an inability to be reached conversationally (Zombie-like), causes ticks and also the VMAT2 (God gene or religious fundamentalist gene referred to by Bill Gates) and VMAT5 (Spirituality gene).