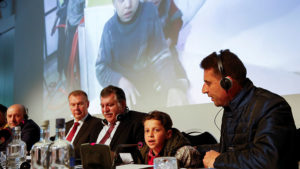 Witnesses of the alleged chemical attack in Douma, including 11-year-old Hassan Diab and hospital staff, told reporters at The Hague that the White Helmets video used as a pretext for a US-led strike on Syria was, in fact, staged. “There were people unknown to us who were filming the emergency care, they were filming the chaos taking place inside, and were filming people being doused with water. The instruments they used to douse them with water were originally used to clean the floors actually,” Ahmad Kashoi, an administrator of the emergency ward, recalled. “That happened for about an hour, we provided help to them and sent them home. No one has died. No one suffered from chemical exposure.”
https://nexusnewsfeed.com/article/geopolitics/no-attack-no-victims-no-chem-weapons-douma-witnesses-speak/