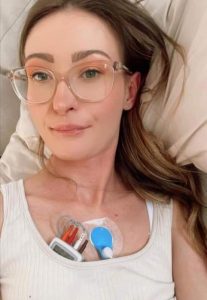 “Jayde, 30 years old, a fit and healthy, vibrant mum of a beautiful little toddler, with no underlying health issues had the whole world at her feet, received her Pfizer Vaccine on 29th September 2021 to keep her job because it became mandatory.

On one occasion she visited her GP who told her to go straight to the hospital as her resting heart rate was up around 140bpm. On this occasion the hospital left her sitting on the floor for the first 4 hours, wouldn’t read the letter from her GP and just kept saying she needed to wait and show it to a Dr. She sat there on the floor in ER as her heart was pounding out of her chest scared she was going to die. She was then finally seen and they again ignored her concerns, dismissed her symptoms, made her take Valium and discharged her with anxiety and told her to see a phycologist – only to return two days later with the same symptoms!

She was finally given a bedside Echogram and diagnosed with Pericarditis.

After being referred to a cardiologist she underwent a lot of medical treatment including a CT brain scan, Heart MRI, Coronary Angiogram and Echograms.

At the first Angiogram appointment, they stated it couldn’t be performed as her heart rate was too high and unstable, even after being on the meds to slow it down. At the second one they increased the dose and they got half way through the Angiogram and had to stop it immediately as it became too dangerous because her heart rate jumped to 180 bpm.

She was diagnosed with Pericarditis, Enlarged Heart, irregular heart beat and inflammation in her hearts left ventricle, as well as left ventricle regurgitation. The heart holter monitor results have shown her heart is skipping beats while she is sleeping. She has been put on a high dose of heart failure medication, colchicine and beta blockers to slow her incredibly high heart rate.

She was told so many times it was all in her head and there was nothing wrong with her heart.

She has lost the ability to look after her little toddler alone, she can’t drive alone as the dizziness just gets too much and she can’t stand or walk for very long and suffers from severe fatigue. The dizziness she experiences on a daily basis has stripped her life away from her, she feels like she is on a boat all the time – there is not much quality of life when you are like that. She puts on a happy and brave face but underneath I can see her heartbreak.

On the 13th of December she was referred on to a professor in cardiology in one of the leading city hospitals. She underwent nerve conduction studies and an autonomic study. She has now also been diagnosed with Gillian-Barre Syndrome and Dysautonomia caused from the adverse reaction to the Pfizer Vaccine.

Unfortunately, Jayde has been suffering for months now with no help from the government. She hasn’t been able to return to work. As a young family they are finding it really tough with the medical expenses, time off work, emergency trips to the hospital and just the ongoing burden of the unknown future they face.

I’m sharing Jayde’s story to bring awareness that these Vaccines aren’t ‘safe and effective’. Who knows this may save someone else’s life. Where there is a risk there should be a choice!”

And this is NOT rare as this RN reports: https://rumble.com/vtge32-tawny-buettner-rn-observed-a-10x-increase-in-the-rate-of-myocarditis-after-.html

The covid shot is NOT safe, it is NOT effective. It is destructive. Do your own research. Do not believe the lies peddled by big pharma and their bought and paid for stooges in government, the medical mafia and the media. It is a LOT easier to get another job than it is to get a new body.