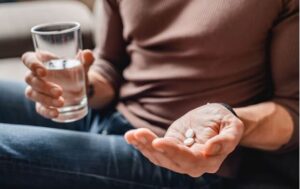 How would you like to lower your risk of dying from cancer by up to 37% simply by popping a pill every day?

According to one of the largest ever meta-studies, those people who regularly take this pill have some very significant reductions in the risk of developing cancer.

And when they do get cancer, they also have a much lower chance of it spreading and dying from it.

You should rush out and buy this inexpensive pill today, right? Wrong! Let me explain….

In this study, researchers from the University of Oxford in England wanted to find out if the most popular pill on the planet fights cancer.

What is that pill? Aspirin. For over 120 years, people have been popping aspirin for pain relief, reducing fever, and fighting inflammation. Each year, people swallow 58 billion doses of aspirin. But can it fight cancer?

To find out, these researchers analyzed the results of 34 different studies. All of these studies included 69,224 men and women.

The Results Were Amazing

Those who had been taking daily aspirin for less than three years had a 15% less chance of dying from cancer. And the odds get even better the longer you take the aspirin.

For those who took aspirin for three to five years, their decrease in death rate from cancer went to 24%.

And for those taking the aspirin for more than five years, the death rate dropped an incredible 37%! And that’s not all.

Aspirin use not only reduced the risk of dying, it also reduced the chance of having metastatic cancer. That’s the kind that spreads all over the body.

Overall, aspirin users were 35-40% less likely to have metastases when they did get cancer.

But what about cutting down on the chances of getting cancer in the first place? The results showed that taking low-dose aspirin for five years or more decreased the chance of developing cancer across the board by 25%. Let me put that into perspective for you.

The statistical chance for both men and women of developing a serious cancer (not including relatively benign skin cancers) sometime in their lives is about 1 in 7. Just by doing one simple thing, taking one low-dose aspirin a day, you can reduce the odds to 1 in 9.

That means I am going to run right out and start taking my one aspirin a day while there is still time, right?

I have already written about the dangers that go along with that simple little aspirin.

First, those who take aspirin and have a stroke die more often than those who don’t take it and have a stroke. Also, it causes stomach ulcers in 13% of those using it without any warning symptoms. And many of these will have a serious stomach bleed at some point.

But it gets worse. Another study showed that taking low-dose aspirin more than doubles your risk of developing wet macular degeneration — the worst kind of macular degeneration. And if that’s not reason enough to forget the aspirin myth, most studies including this one have shown that it does not prevent heart attacks like most doctors will tell you.

So aspirin is a good cancer preventive, but it just has too many side effects to use. If only there was something out there that’s just as effective as aspirin without the negative side effects. Well, as it turns out, there is.

Before I tell you what it is, we should know how aspirin counteracts cancer. Unfortunately, nobody knows for sure. But the possibilities proposed so far include the fact that many cancers depend on inflammation to survive, and aspirin is an anti-inflammatory.

Others suggest it may work by decreasing the mutations that are suspected to cause cancer in the first place. I don’t believe this because the data shows that mutations have nothing to do with who develops cancer and who doesn’t. People without cancer have just as many of the same kinds of mutations as those who don’t.

And still another reason some propose has to do with platelets. Platelets are cell fragments that are instrumental in the body’s clotting system. Some indications are that one of the ways that cancer cells can metastasize throughout the body is by hitching a ride on platelets that have clumped together. One of the actions of aspirin is to prevent platelet clumping, and hence decrease the cancer’s ability to spread.

So it appears to me that the major cancer-preventing actions of aspirin have to do with its ability to calm down inflammation and to prevent platelet clumping.

And Here’s Some Good News

You can increase both of these actions in your body very well with foods — namely fish oil and spices.

Literally hundreds of studies have shown that taking one to four fish oil capsules a day decreases both inflammation and platelet clumping just like low-dose aspirin does.

The best herbs and spices are clove oil, cayenne, and green tea. These spices significantly inhibit platelet clumping. In fact, one study found that the principal component of clove oil, eugenol, is 29 times more potent than aspirin in inhibiting platelet clumping. And the other spices I mentioned were not far behind clove oil.

And, of course, unlike aspirin, the really good news is that none of these foods produces ulcers or has any of the other side effects that come with aspirin.

Here’s What I Recommend

Based on the very impressive findings in this study, make sure you are taking at least one to two fish oil capsules per day. Make sure you’re also taking cayenne capsules, which you can buy online and at the health food store (take two per day with food).

And lastly, consider taking holy basil, green tea extract, and rosemary. All of these herbs have a strong anti-inflammatory action. Together, all of these (and others) can help you fight cancer at least as well as aspirin, but perhaps even better.