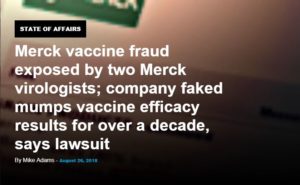 Breaking news: According to two Merck scientists who filed a False Claims Act complaint in 2010 — a complaint which has just now been unsealed — vaccine manufacturer Merck knowingly falsified its mumps vaccine test data, spiked blood samples with animal antibodies, sold a vaccine that actually promoted mumps and measles outbreaks, and ripped off governments and consumers who bought the vaccine thinking it was “95% effective.”

According to Stephen Krahling and Joan Wlochowski, both former Merck virologists, the Merck company engaged in all the following behavior:

• In order to do this, Merck spiked the blood test with animal antibodies in order to artificially inflate the appearance of immune system antibodies. As reported in CourthouseNews.com:

Merck also added animal antibodies to blood samples to achieve more favorable test results, though it knew that the human immune system would never produce such antibodies, and that the antibodies created a laboratory testing scenario that “did not in any way correspond to, correlate with, or represent real life … virus neutralization in vaccinated people,” according to the complaint.( https://www.courthousenews.com/Class-Says-Merck-Lied-About-Mumps-Vaccine/)

• Merck then used the falsified trial results to swindle the U.S. government out of “hundreds of millions of dollars for a vaccine that does not provide adequate immunization.”

• Merck’s vaccine fraud has actually contributed to the continuation of mumps across America, causing more children to become infected with mumps. (Gee, really? This is what NaturalNews has been reporting for years… vaccines are actually formulated to keep the outbreaks going because it’s great for repeat business!)