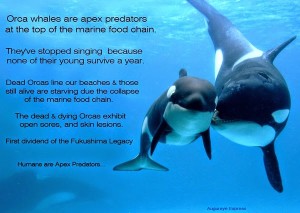 In 2008, the Scientific American reported that there were 406 dead zones — meaning there was not enough oxygen to support life — worldwide. At that time, the blame was from fertilizer and pesticide runoff.
http://humansarefree.com/2016/09/radiation-from-fukushima-now-causes-100.html?utm_campaign=shareaholic&utm_medium=facebook&utm_source=socialnetwork&m=0