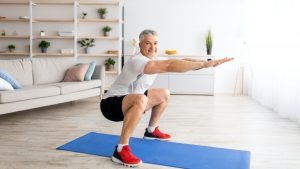 Being able to sit down on the floor and stand up from that position without using one’s hands can indicate a person’s potential longevity, according to a 2012 study published in the European Journal of Cardiology.

If a person can stand up from the floor with the help of one hand or one knee, the study found, they wouldn’t live quite as long as those who can stand up without using their hands or knees, but they would live longer than someone who needed both hands or both knees to stand.

When I read about this study, I immediately incorporated standing without the use of hands into the yoga classes of all ages that I teach.

In all variations of this movement, at least one knee must bend beyond the toes to make the transition possible. Conventional wisdom in athletic training has condemned exercising with knees over toes, despite the fact that it’s necessary for sitting on the floor, not to mention climbing stairs.

“Contrary to popular belief, evidence only exists showing that the more ability you have with your knees over your toes, the less chance you have of knee pain and surgery,” writes Ben Patrick on his Medium page. Patrick is a knee-strength coach who’s extensively researched knee injuries, having had three surgeries by age 18 and suffered multiple torn ligaments.

He points to a 2016 study published in Medicine & Science in Sports & Exercise that followed people after anterior cruciate ligament (ACL) reconstruction and found that step-down and quadricep training improved performance six months after surgery.

But the training world has been fixated on the dangers of allowing the knees to extend beyond the toes ever since a 1978 Duke University study claimed that more pressure is put on the knees when they go over the toes.

Patrick and other trainers are attempting to shift the narrative in line with what they are experiencing in real time—that people can strengthen their joints by challenging their range of motion at the ankles and gaining a deeper squat. Not only is this possible, but anyone can do it, taking into consideration past injuries and other limitations.

A review published in Sports Medicine in 2013 looked at 164 relevant studies over a two-year period and found deep squats don’t contribute to an increased risk of injury and, in fact, a deep squat done with the right form can prevent degenerative changes in the joints.

Knees Over Toes for Seniors

Older adults who desire to maintain their flexibility, mobility, and strength for decades are jumping on the bandwagon.

Patrick’s mother, Celia, had a chance to personally test the notion that intentionally exercising with the knees past the toes could allow her to bend over and squat down without pain or assistance.

Despite being active her whole life, she woke up one morning with persistent pain and stiffness in her hips. She was very concerned when it became difficult to pick things up from the floor, so she reached out to her son, who scaled his exercises for her.

Now age 68, Celia can lower to her knees in “hero” pose, sit in “easy” pose, and hold a low squat with ease and no pain. She demonstrated all three a year ago in a video for Patrick’s YouTube channel.

In the video, in seconds, she transitions through sitting postures that are more commonly seen on a blanket of toddlers at a park playdate.

“Kids do this all the time,” Celia says as she squats, her buttocks resting on her heels. “I’m going to be doing this in my 90s. Watch.”

She also highlights Patrick’s signature exercise—split squats—which she credits with strengthening and building flexibility in her ligaments, tendons, muscles in and around her feet, ankles, knees, hips, and lower back.

“This one in particular is going to allow me to ride into my 70s, 80s, and 90s pain-free and mobile,” Celia says in the video, demonstrating three different levels used to ease into the exercise.

“The hip pain and stiffness went away entirely never to return—ever.”

Patrick’s program is highly rated by many people in their golden years who are seeking functional exercises to help them either to avoid surgery or to improve their quality of life. But he’s hardly the only one.

Cindy Ward, a CrossFit Level 1 and American Council on Exercise (ACE)-certified personal trainer, reminds her clients constantly that if their goal is to stay out of the nursing home, then it’s important that they can get on and off the toilet without assistance. That means strengthening the knee at the 90-degree mark, which means building flexibility at every angle above and below that.

“Your body is meant to move. Your knee isn’t a 90-degree only joint,” Ward said.

Nine out of 10 of her clients tend to naturally stop any attempt to squat at that point, which actually puts even more pressure on the joint and can make it more prone to injury. Ward coaches all ages and body shapes from the standpoint of functional fitness.

The Origin Series, an organization that certifies fitness coaches, is debunking the knees-over-toes myth and encouraging teachers to follow studies like one from 2003 in The Journal of Strength and Conditioning Research that found limiting the natural deep bend of the knees could actually put more stress on the hips and lower back.

The ACE says that “don’t let your knees go beyond your toes” could be good advice in a group exercise class when erring on the side of caution, but it’s a disservice in one-on-one training.

It points out research from 1994 that Olympic weightlifting has a lower incidence of injury than many other competitive sports, and those athletes’ knees always extend beyond their toes. Training for flexibility in the joints, as weightlifters do, can strengthen the body and prevent harm.

Why Knees Over Toes Matters

I recognized many of the movements that Patrick recommends from my husband’s work hardening, an intense rehabilitation program he was required to complete in order to return to his physically demanding job. He needed reconstructive surgery for his ACL and medial collateral ligament in 2019 after a workplace accident. In his therapy, he did a lot of backward movement and deeper squats in four-hour daily workouts.

His recovery was stellar, something his physician and nurse commented about, and there’s no doubt the deep flexion and functional rehabilitation made all the difference. Flexion is the act of bending a joint or limb by using flexor muscles.

Naturally, rehabilitation after surgery doesn’t start with this kind of activity. My husband was non-weight-bearing for six weeks and then entered several weeks of physical therapy, much of it to reverse muscle wasting. Before taking it to the point of knees over toes, he needed to strengthen his quadricep muscle and the surrounding tendons. It required consistent hard work.

Patrick’s program begins with exercises to build up the range of motion of the ankle joint as a foundational requirement to deepen the squat and support the load. When the patella and femur are at 90 degrees of flexion, the knee carries an estimated force of 6 1/2 times the body weight.

Form is critical always but especially after injury or surgery to any lower body joint. Squats, for instance, must involve the hips lowering straight down, not back, and with an even distribution of weight between the hips and the knees.

What motivates Patrick isn’t much different from what motivates Celia—living a pain-free life doing the things he loves. For him, it’s playing basketball and being able to dunk from a stationary position. For his mom, it’s getting on the ground pain-free to play with her grandson.

Celia said: “I want to be able to swim and climb and ride bikes and roller skate and skateboard. … If he’s chasing me, I’m going to be able to run. See ya! You can’t catch me!”

It’s always best to work with a trained expert and be certain of correct form, especially when you are coming off an injury. When it comes to knee health, here are some of the exercises commonly found in Patrick’s and other certified trainers’ content:

Lean with your back against a wall and take a step out.

With both feet together and without bending your knees, flex your feet and lift your toes up.

If it’s too challenging, step in or take off your shoes.

To make it more challenging, take another step out.

Start at a beginner level without weights using a sturdy bench or surface about 2 to 3 feet tall.

Place one foot on the bench with the back leg extended behind you in a lunge. Bend the front knee so it extends over the toes.

Straighten and re-bend the front knee to a comfortable depth in repetitions of 10.

Find a surface about a foot tall for the next level.

Elevate the back heel on a weight plate or door stop as you let the hips sink lower as tolerated.

Five days a week, Patrick recommends 200 meters of pulling a sled, or a Tank sled, backward.