I received this email from Kenn wherein he outlines restoring trial by jury as the permanent solution to despotic/tyrannical government. It struck me (again) that now, more than ever, he is spot on the money.

I have been asked for which political party I intend to vote in the upcoming election. While there is a chance that among the general population there is enough disagreement with government overreach to effect a major change,
1. There is no guarantee of it and
2. Voting did not stop us from getting into the pickle in which we now find ourselves so there is no certainty it will keep the evil at bay for any length of time.

After all, bribery and blackmail our powerful tools against politicians and judges and who amongst us is perfect? And, even if we were saint like, who is immune to an assassin’s bullet? They are powerful persuaders!

So I perceive relying only on the ballot box to be an uncertain and perhaps only temporary victory.

Whereas if we restore common law trial by jury, where a jury of twelve of one’s peers can judge the justness of the law as well as whether or not the person ‘did the deed’ it matters not what tyranny is passed in the legislature if those tyrannical laws can be nullified in the court room.

Trial By Jury is a far more certain guarantee of liberty and protection against tyranny than the ballot box ever was or will be!

If you agree, please share the word. We need to solve this present situation!) 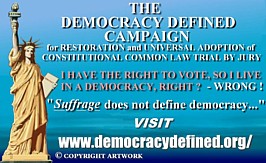 Dear Tony,
Greetings. Thank you for your e-mail about Australia (and others’) participation in the grotesque Lima Agreement.

I sometimes wonder whether you really do understand and appreciate the significance to you personally, and all Australians in general, of restoring the Constitutional Trial by Jury Justice System.

You spend much time and energy circulating documents about the gross injustices you have personally experienced and those measures of misgovernance which adversely affect the whole population. By so doing, you generate intense apathy amongst the recipients of your circulars unless you simultaneously accompany such tales of woe with the vital but little known facts which show that these Crimes against Humanity are actually capable of being instantly redressed by ‘ordinary’ Citizens (single or multiple plaintiffs). This is achieved by cost-free Constitutional Private Prosecutions of, de facto, criminal politicians and judges who instigate and maintain unjust laws (statutes) and regulations.

Please do give your consideration to this phenomenon which I addressed in DEMOCRACY DEFINED: The Manifesto ISBN 978-1902848280 See page below.

There is no peaceful resolution to the problem of illegitimate government without Restoration of the Trial by Jury. (That takes widespread unanimity of purpose amongst the populace—as there was for Restoration of Trial by Jury via Magna Carta on June the Fifteenth, in the year Twelve Hundred and Fifteen.) Only through Restoration shall we achieve preclusion of the infliction of antidemocratic legislation by despotic government’s persecutory tool of enforcement: the trial-by-judge. Readers, if you appreciate these facts, then you will see that there is no (secular) cause more important than Restoration.

Without understanding how emancipation is only to be attained by Restoration, the unavoidable result is that people become increasingly apathetic in the absence of this knowledge. They face complete loss of their liberty, justice system, Constitution and rights because they have no realistic perception of how the proper rule of law is achieved. Witness how the majority of enthusiastic patriots are still passively submitting to political felons’ overthrow of their longstanding democratic culture. They remain docile and inactive despite the visibly progressing government destruction of their modus vivendi and country.

Time, effort and resources expended on other “campaigns” are wasted unless they are also specifically concentrated and deployed to educate and achieve the Restoration of Trial by Jury. Restoration must be the focus and inspiration of all efforts. With it, all will be resolved; without Restoration, there is NO Solution. Although there might be some small apparent “wins” periodically, they will be inexorably reversed in due course by tyranny exerted through the statist technique of trial-by-judge or arbitrary government employee.

Nothing, but nothing, short of Restoration is capable of stopping the ever-gaining momentum of the runaway new world order juggernaut.

The circulars, books and talks by internet campaigners and so many other apparently well-intentioned people do raise awareness about the enormous problem of misrule, but to date their efforts conspicuously lack specifying exactly what the only peaceful solution is. For example, they exhort people, “to rise up and overthrow the culprits.” They urge people to, “get off their knees.” Some remind people that the American Declaration of Independence expresses the moral certainty that if government fails the people, they have the right and even the duty to replace it—but to date all the froth of their speechifying ‘campaign’ efforts reveals that they have no inkling of the real solution. They are no closer to success than when they started up.

Unless we achieve Restoration, the ‘crime’ of criticising government (already-legislated in the EU) will see all democratic dissenting campaigners gradually disappear or be “removed” from the scene. (See Chapter Two, “It Couldn’t Happen Here,” Solzhenitsyn.) So, these well-intentioned but misguided “internet campaigners” had best realign their sights without delay, to adopt and campaign wholeheartedly for Restoration.

The gravity of self-appointed internet campaigners’ distractions away from the Restoration Solution cannot be exaggerated while they constantly alarm folk about troubling circumstances and events. People en masse are completely bewildered as to what they can do about the decomposition of their society.

Without knowledge of the Restoration cure, the disease of indifference worsens, becomes more deeply entrenched and spreads. The internet ‘campaigning’ by these men and women is counterproductive and could not work more to the long-term advantage of the Rothschild-Rockefeller-Morgan-Bush-Brown-Brothers-Harriman one-world-government cartel even if they were its paid employees.

RESTORATION of the people’s control of government through the Constitution’s Common Law Trial by Jury Justice System is the effective, legal, lawful, honourable and constitutional way for people to take back control of their own destiny. Let’s hear all you internet prophets of doom get constructive and say so!

It would be helpful to your own cause and that of the People at large if, in future, when circulating texts which expose misgovernance and injustice, you always simultaneously attach the educational information on RESTORATION of the Constitutional Common Law Trial by Jury Justice System because it demonstrates how the ‘ordinary’ citizen can stop and reverse government injustice. Fight the good fight and help spread the word.

See for example Broadsheet #1 and the EIS4 Juror’s Leaflet for attaching to your circulars.

Wishing you all the best,
Kenn.
Kenn d’Oudney. Coordinator.
CAMPAIGN FOR RESTORATION OF JUDICIUM PARIUM,
THE CONSTITUTIONAL COMMON LAW TRIAL BY JURY.
www.democracydefined.org