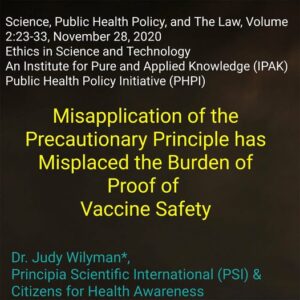 Abstract: Vaccination is a medical intervention that comes with a risk for some people. In the expression of infectious diseases, it is known that the pathogen alone does not cause disease: it is a combination of the pathogen, environment, and genetic factors that determines expression and severity of the disease in individuals. In 1960 Macfarlane Burnet, Nobel Prize laureate for immunology, stated that genetics, nutrition, psychological and environmental factors may play a more important role in resistance to disease than the assumed benefits of artificial immunity induced by vaccination. He considered that genetic deterioration of the population may be a consequence of universal mass vaccination and he postulated that in the long-term vaccination may be against the best interests of the state. The current belief that much of the burden of infectious diseases can be alleviated if every child, in every geographical location, has access to multiple vaccines, does not consider the influence of genetics and environment on the health of populations. The historical record shows that deaths and illnesses to infectious diseases fell due to public health reforms – and prior to the introduction of most vaccines. Since 1990 there has been a 5-fold increase in chronic illness in children in developed countries and an exponential increase in autism that correlates directly with the expansion of government vaccination programs. Many individuals are genetically predisposed to the chronic illnesses that are increasing in the population and since 1995 governments have not used mortality or morbidity to assess outcomes of vaccination programs.
Human health can be protected in government policies if the precautionary principle is used in the correct format that puts the onus of proof of harmlessness on the government and pharmaceutical industry, and not the general public. This has not been done in current vaccination programs and we cannot rule out the possibility that the increased use of vaccines is destroying the genetic fabric of society as MacFarlane Burnet postulated.

Wilyman, J. Misapplication of the Precautionary Principle has Misplaced the Burden of Proof of Vaccine Safety. Science, Public Health Policy & the Law Nov 2020 2:23-34.