Over the last two and a half years I have read a few people expressing concern and dismay over other people’s choices and decisions. So I thought I’d pen a few words that might help.

I had a few “I wonder why…” moments about other people’s thinking before but the realization that I knew very little about the human mind hit me like a bolt when I was 16. I was working for my father as a stamp dealer. He was on Norfolk Island for 12 months, qualifying as a resident. I came up with a bright idea of how to improve a process and explained it to one of the girls who worked with me. She said, “No.”

“Obviously,” I thought to myself, “I haven’t explained this well enough.”

To which she again said, “No.”

To this day I still recall thinking, “Well! THAT didn’t work. Let me try something different.” So I asked, “Why not?”

Well! You reckon THAT didn’t set me back on my heels! I thought, “That’s interesting. Logic did not work with her. There’s things I don’t know about the human mind. I should do a course on it. Maybe take up psychiatry.” And a little voice said to me, “Don’t do that. It will stop you doing something you want to do later in life.” Well that was a second bolt from the blue in as many minutes! I could not for the life of me think of what it would prevent me from doing. But that’s another story for another time.

So I went along my way in life seeking understanding and learning bits and pieces, as we all do, until one day, quite a few decades ago now, I was incautious enough to have a disagreement with my wife. (I know, I know, I know, “Happy wife, happy life.” But I didn’t learn that till much later. It should be at the top of every marriage application!) I expected her to do something and she did not do as I expected.

Fuming, I went upstairs, to cool down. I sat on the couch facing a green door. Not any old green but to me a remarkably unattractive shade of blue-green. As I was pondering the unattractiveness of the green door it hit my like a bolt from the blue! Me being upset with my wife for not doing as I expected was more a fault of my lack of understanding of her than any fault of hers! Who was wrong? Julie for being Julie or me for expecting something else from her than what was real?

From my US friends I have since heard a saying, “Burn me once, shame on you. Burn me twice, shame on me.”

So I increased my learning of other people and how to predict what to expect from them.

You might find interesting some of the bits of data I have collected over the years.

One was from research the Tavistock Institute conducted during WWI to see if they could get more Brits to be in favour of the war against Germany. They found that 87% of people could be swayed by emotion, that only 13% reasoned to arrive at a viewpoint. More here: https://www.tomgrimshaw.com/tomsblog/?p=39776

In the 60s the KGB did some fascinating psychological experiments.

They learned that if you bombard human subjects with fear messages nonstop, in two months or less most of the subjects are completely brainwashed to believe the false message.

To the point that no amount of clear information they are shown, to the contrary, can change their mind.

Explain a little of the last two years? How you could detail fact after fact to a person and they would not get it?

More along the same line, a researcher estimated that on this planet there were 18-20 degraded beings for every one big being. The degraded beings had been so badly harmed that they were little more than automatons or robots. Capable of following orders and little more. (Many can no longer even follow orders. If you’ve had to manage other people you’ll know this for fact!) This is the group that the Klaus Schwab’s of this world call “useless eaters” and would like to replace with mechanical robots with AI (Artificial Intelligence). Shame he did not devote his attention to addressing how to help them out from under their burdens rather than figuring out ways to dispense with them entirely.

In another article the same researcher noted that there were probably not more than about 10,000 people on this planet capable of doing a bit of steering or leading. We now have 8.000,000,000 people on the planet. So that’s one leader to every 800,000 people. Too few leaders and too many followers if you ask me.

If you are interested in the history of this challenge to progress or you are aware and despair of the masses, here’s a resoundingly good listen.

Appealing to the Remnant Rather Than The Masses
https://mises.org/library/isaiahs-job-0

Could be one reason the creator of a meme I saw recently wrote: “You’re job is not to wake the sheep. It is to gather up the other lions.” 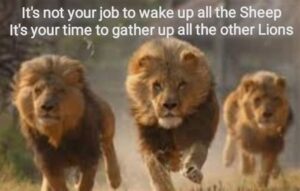 Another thing I learned WAY too late in life was that arguing with someone does not change their mind, it just more firmly entrenches their existing view. After I read that I looked over the not inconsiderable number of arguments I have had in life and could not identify a single instance where someone said to me, “You’re right, I was wrong. You’ve changed my mind.”

Life has been considerably more peaceful since I learned that lesson.

This is why I created a series of articles that provided questions to ask people to encourage them to look rather than just feel or regurgitate what they had been spoon fed.

Then there is the difference between intelligence and awareness.

Intelligence is the ability to solve problems. You need to remember data and principles apply them to a specific problem and come up with a workable solution. We are all gifted with a different intelligence level.

Then there is awareness. You may have hear the saying, “When the student is ready, the master will appear.” or another, “You cannot teach somebody something he does not already know.”

In order for someone to see the truth in what you are saying, their awareness level needs to be adequate to recognize the truth of it. They must to some degree already know it to be true otherwise they will not get it.

So if they are chock full of data contrary to the truth you are trying to share you are pushing peanut butter uphill with a toothpick trying to get them to see it.

This is why a great many intelligent people who did not have a high enough awareness level were so badly deceived over the last 3 years.

Now, there are techniques you can use to get past this very large obstacle but they are time consuming. And we do not have an infinity of time to pull this civilization out of its downward spiral. Hence some people advocate for targeting the low hanging fruit, the people aware enough to receive your message with far less hard work. Awakening the sleeping lions.

And a final word of hope, it does not take a majority to improve conditions. As Margaret Mead is quoted as having said, “Never doubt that a small group of thoughtful, committed citizens can change the world; indeed, it’s the only thing that ever has.”

Here is proof of that. As soon as you 3.5% non-violently activated you are looking like a winner: