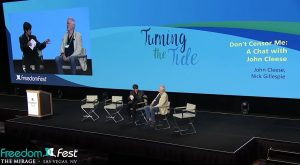 The Monty Python legend says political correctness is ruining creativity in all aspects of human activity.

From shows and movies ranging from Monty Python’s Flying Circus and Fawlty Towers to Life of Brian and A Fish Called Wanda, the comedian John Cleese has uproariously and relentlessly satirized politics and religion while stretching the boundaries of decorum and good taste like so many silly walks.

Now 82, Cleese—who studied law at Cambridge—has recently set his sights on political correctness and wokeism, which he says are the enemy not only of humor but of creative thinking in all areas of human activity.