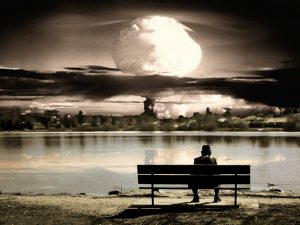 By Veteran Intelligence Professionals for Sanity

MEMORANDUM FOR: The President
FROM: Veteran Intelligence Professionals for Sanity (VIPS)
SUBJECT: Nuclear Weapons Cannot Be Un-invented, Thus …
PRECEDENCE: IMMEDIATE
REF: Our Memo of 12/20/20, “Don’t Be Suckered on Russia”

Mainstream media have marinated the minds of most Americans in a witches’ brew of misleading information on Ukraine – and on the exceedingly high stakes of the war. On the chance you are not getting the kind of “untreated” intelligence President Truman hoped for by restructuring intelligence, we offer below a 12-point factsheet. Some of us were intelligence analysts during the Cuban missile crisis and see a direct parallel in Ukraine. As to VIPs’ credibility, our record since Jan. 2003 – whether on Iraq, Afghanistan, Syria, or Russia – speaks for itself.

1. The growing possibility that nuclear weapons might be used, as hostilities in Ukraine continue to escalate, merits your full attention.

2. For almost 77 years, a common awareness of the awesome destructiveness of atomic/nuclear weapons created an (ironically stabilizing) balance of terror called deterrence. Nuclear-armed countries have generally avoided threatening to use nukes against other nuclear-armed countries.

3. Putin’s recent reminders of Russia’s nuclear weapons capability can easily fit into the category of deterrence. It can also be read as a warning that he is prepared to use them in extremis.

4. Extremis? Yes; Putin regards Western interference in Ukraine, particularly since the coup d’etat in Feb. 2014, as an existential threat. In our view, he is determined to rid Russia of this threat, and Ukraine is now a must-win for Putin. We cannot rule out the possibility that, backed into a corner, he might authorize a limited nuclear strike with modern missiles that fly many times the speed of sound.

5. Existential threat? Moscow sees U.S. military involvement in Ukraine as precisely the same kind of strategic threat President Kennedy saw in Khrushchev’s attempt to put nuclear missiles in Cuba in violation of the Monroe Doctrine. Putin complains that US”ABM” missile sites in Romania and Poland can be modified, by simply inserting an alternate compact disk, to launch missiles against Russia’s ICBM force.

6. As for putting missile sites in Ukraine, according to the Kremlin readout of your Dec. 30, 2021 telephone conversation with Putin, you told him the US”had no intention of deploying offensive strike weapons in Ukraine”. So far as we know, there has been no objection to the accuracy of that Russian readout. Nevertheless, your reported assurance to Putin disappeared into thin air – contributing, we imagine, to Russia’s growing distrust.

7. Russia can no longer doubt that the US and NATO aim to weaken Russia (and to remove him, if possible) – and that the West also believes it can accomplish this by pouring weapons into Ukraine and urging the Ukrainians to fight on. We think these aims are delusional.

8. If Secretary Austin believes that Ukraine can “win” against Russian forces – he is mistaken. You will recall that many of Austin’s predecessors – McNamara, Rumsfeld, Gates, for example – kept assuring earlier presidents that corrupt regimes could “win” – against foes far less formidable than Russia.

9. The notion that Russia is internationally “isolated” also seems delusional. China can be counted on to do what it can to prevent Putin from “losing” in Ukraine – first and foremost because Beijing has been designated “next in line”, so to speak. Surely, President Xi Jin-Ping has been briefed on the Pentagon’s “2022 National Defense Strategy” identifying China as the #1 “threat”. Russia-China entente marks a tectonic shift in the world correlation of forces. It is not possible to exaggerate its significance.

10. Nazi sympathizers in Ukraine will not escape attention on May 9, as Russia celebrates the 77th anniversary of the victory by the Allies over Nazi Germany. Every Russian knows that more than 26 million Soviets died during that war (including Putin’s older brother Viktor during the merciless, 872-day blockade of Leningrad). Denazification of Ukraine is one of the key factors accounting for Putin’s approval level of above 80 percent.

11. The Ukraine conflict can be called “The Mother of All Opportunity Costs”. In last year’s “Threat Assessment”, National Intelligence Director Avril Haines identified climate change as a major national security and “human security” challenge that can only be met by nations working together. War in Ukraine is already diverting much needed attention from this impending threat to coming generations.

12. We note that we sent our first Memorandum of this genre to President George W. Bush on Feb. 5, 2003, critiquing Colin Powell’s unconfirmed-intelligence-stuffed speech at the UN earlier that day. We sent two follow-up Memos in March 2003 warning the president that intelligence was being “cooked” to justify war, but were ignored. We end this Memo with the same appeal we made, in vain, to George W. Bush: “You would be well served if you widened the discussion beyond the circle of those advisers clearly bent on a war for which we see no compelling reason and from which we believe the unintended consequences are likely to be catastrophic.“

Lastly, we repeat the offer we made to you in December 2020 (in the VIPs Memorandum referenced above): ’We stand ready to support you with objective, tell-it-like-it-is analysis.’ We suggest you might benefit from “outside” input from veteran intelligence officers with many decades of experience on the “inside”.