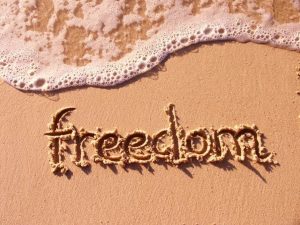 Some timely reminders on that most valuable of commodities from the Optimism newsletter put out by Cecile Vowles.

You can have peace. Or you can have freedom. Don’t ever count on having both at once. ~Robert A. Heinlein

So keep fightin’ for freedom and justice, beloveds, but don’t you forget to have fun doin’ it. Lord, let your laughter ring forth. Be outrageous, ridicule the fraidy-cats, rejoice in all the oddities that freedom can produce. – Molly Ivins

You have freedom when you’re easy in your harness. – Robert Frost
Quote of the Day

Freedom is never more than one generation away from extinction. We didn’t pass it to our children in the bloodstream. It must be fought for, protected, and handed on for them to do the same, or one day we will spend our sunset years telling our children and our children’s children what it was once like in the United States where men were free. – former US President Ronald Reagan

It is difficult to free fools from the chains they revere. – Voltaire

It was easier to believe in the march of democracy in Gladstone’s day — in that high noon of Victorian optimism. We’re approaching the end of a bloody century plagued by a terrible political invention — totalitarianism. Optimism comes less easily today, not because democracy is less vigorous, but because democracy’s enemies have refined their instruments of repression. Yet optimism is in order, because day by day democracy is proving itself to be a not-at-all-fragile flower.

… there is a threat posed to human freedom by the enormous power of the modern state. History teaches the dangers of government that overreaches — political control taking precedence over free economic growth, secret police, mindless bureaucracy, all combining to stifle individual excellence and personal freedom. -former US President Ronald Reagan, 8th June 1982, in his speech to the British Parliament