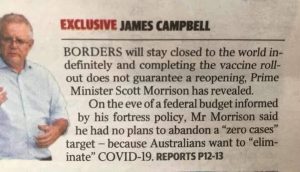 As has been said before this is a strain of the flu. This decision by the Prime minister is ludicrous tyranny for the flu! Nothing less. He is a traitor to the people he is supposed to lead. Blind Freddy could do a cost benefit analysis that would result in us opening the borders instantly! Many experts have stated exactly that. The emotional, financial and societal cost of the lockdowns is catastrophic.

You can tell an unduly influenced decision maker or lunatic by the fact that their decisions are non-scientific and destructive, all in the name of helping. Helping us all to an early death.