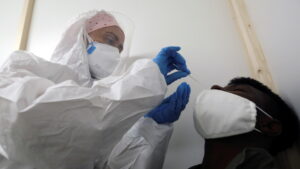 Jay Lawrence writes:
1) PCR Tests cannot be used to specifically test for Covid-19 since Covid-19 has not been isolated.

2) Since the Covid-19 Virus has not been isolated PCR Tests can only test for the Corona family of viruses of which Covid-19 is one. However, this means that a positive result for Corona could mean Covid-19 or any one of the other dozen or so Corona viruses.

3) PCR tests work on “amplifying” any DNA sequence present in the test sample until there is enough of it that it can be recognized. And it doesn’t matter whether the DNA present in the sample is alive or dead. Therefore, if there is even the smallest piece of a DNA sequence in the test sample and you amplify it enough times you will get a positive result for virtually anything you are looking for.

For this reason, Kary Mullis, the inventor of the PCR Test, stated that the amplification factor should never exceed 17 or you run the very real risk of testing positive for just about anything from any sample.

Aside from the problems with PCR Tests being used for Covid testing listed in 1) and 2) above is that testing authorities in most countries around the world, but certainly Australia and the United States, amplify by a factor of 30 to 40 times which means that their results are GROSSLY UNREALIABLE.

This is exactly why the WHO has had to come out and finally come out and admit that the PCR Tests are producing false positives.

Here is a link to an article that covers a recent court case in Portugal on this very topic which shows that PCR Tests are likely to be LESS THAN 3% accurate in detecting Covid-19.

By Peter Andrews, Irish science journalist and writer based in London. He has a background in life sciences, and graduated from the University of Glasgow with a degree in genetics.

Four German holidaymakers who were illegally quarantined in Portugal after one was judged to be positive for Covid-19 have won their case, in a verdict that condemns the widely-used PCR test as being up to 97-percent unreliable.
Earlier this month, Portuguese judges upheld a decision from a lower court that found the forced quarantine of four holidaymakers to be unlawful. The case centred on the reliability (or lack thereof) of Covid-19 PCR tests.

The verdict, delivered on November 11, followed an appeal against a writ of habeas corpus filed by four Germans against the Azores Regional Health Authority. This body had been appealing a ruling from a lower court which had found in favour of the tourists, who claimed that they were illegally confined to a hotel without their consent. The tourists were ordered to stay in the hotel over the summer after one of them tested positive for coronavirus in a PCR test – the other three were labelled close contacts and therefore made to quarantine as well.

Unreliable, with a strong chance of false positives
The deliberation of the Lisbon Appeal Court is comprehensive and fascinating. It ruled that the Azores Regional Health Authority had violated both Portuguese and international law by confining the Germans to the hotel. The judges also said that only a doctor can “diagnose” someone with a disease, and were critical of the fact that they were apparently never assessed by one.

They were also scathing about the reliability of the PCR (polymerase chain reaction) test, the most commonly used check for Covid.

The conclusion of their 34-page ruling included the following: “In view of current scientific evidence, this test shows itself to be unable to determine beyond reasonable doubt that such positivity corresponds, in fact, to the infection of a person by the SARS-CoV-2 virus.”