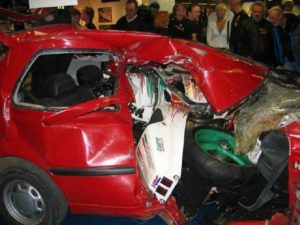 The Honda crotch rocket rider was travelling at approximately 85 mph.
The VW driver was talking on a cell phone when she pulled out from a side street, apparently not seeing the motorcycle. The rider’s reaction time was not sufficient enough to avoid this accident.
The car had two passengers and the bike rider was found INSIDE the car with them.
The Volkswagen actually flipped over from the force of impact and landed 20 feet from where the collision took place.
All three involved (two in the car and the bike rider) were killed instantly. This graphic demonstration was placed at the Motorcycle Fair by the Police and Road Safety Department..
Pass this on to car drivers or soon to be new drivers, or new motorcycle owners and especially everyone you know who has a MOBILE phone!!!
A picture is worth a thousand words.
Save a life. Stop talking on mobile phones and Texting while trying to drive.
The life you save may be your own….. Or mine…