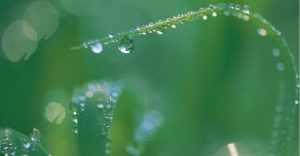 PFAS chemicals, often referred to as “forever” chemicals, have been a hot topic in recent years, thanks to constant discoveries that these persistent chemicals are everywhere from drinking water and the air to breast milk and food packaging.

And now, a new study has discovered that not only are forever chemicals in water, but they are found in rainwater all across the world, at levels that reportedly render all rainwater undrinkable.

PFAS are synthetic hazardous chemicals that have been used widely in various products and industries since the 1940s. They have been connected to hormone disruption, cancer, reproductive issues, and fetal developmental issues. Because PFAS chemicals essentially do not break down in the environment, they are often referred to as forever chemicals.

PFOA is one of the most commonly-used classes of PFAS chemicals, and most studies on PFAS focus on PFOA, as per the American Cancer Society.

For this new study, the researchers spent the past 10 years studying the atmospheric presence and transport of PFAS, using both field work and lab work. In the end, the team found that PFAS chemicals spread easily throughout the atmosphere, meaning they end up in “various global environmental media,” such as rainwater, soils, surface waters, and snow “in even the most remote locations on Earth,” from Antarctica to the Tibetan Plateau.

The researchers concluded “rainwater everywhere is unsafe to drink based on EPA’s new health advisories,” a spokesperson for the Green Science Policy Institute tells Green Matters in an email ahead of the report’s publication.

They found that levels of PFOA and PFOS in rainwater “often greatly exceed” levels set by the EPA, the Danish government, and the Environmental Quality Standard for Inland European Union Surface Water; additionally, this contamination has affected global soils at levels exceeding proposed Dutch guidelines.