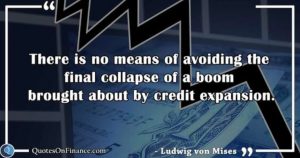 A fundamental confidence in the power and authority of governments setting monetary policy is required for fiat currencies to have any validity with its users. If that goes, preferences in favour of a currency become eroded to the point where no sane consumer wants to hold it.

We are now at an important point in that journey to extinction. Interest rates are rising inexorably, and market participants are just beginning to understand that official forecasts, which are after a year or two of slightly higher interest rates price increases will return to a targeted CPI rise of 2%, are propaganda. The financial bubble, which has been decades in its inflating, is now imploding.

In it past time to consider the policy makers’ response. Having discarded the quantity theory of money, we can see that the imploding financial bubble requires central banks to increase the rate of currency expansion and to underwrite the expansion of bank credit, by rescuing the entire commercial banking network if called upon.

We are about to experience the worst of two worlds simultaneously: while the financial bubble collapses, in anticipation of and the response to an accelerated debasement of fiat currencies, prices of everything from commodities to finished goods will soar as a crack-up boom materialises.