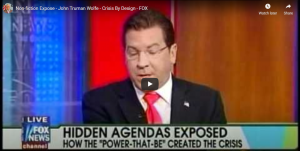 A few years ago, I wrote a book, The Coming Financial Crisis – A Look Behind the Wizard’s Curtain. The book, which exposed the oppressive activities of the Bank for International Settlements in Basel Switzerland and their role in the global financial crisis, became a #1 bestseller on Amazon.

Unbeknownst to me, a friend of mine in Taiwan sent a copy of the book to a contact of hers in Beijing. She subsequently sent me an email saying that people in the government there were interested in discussing some of the solutions I offered in the book.

I thought it was a joke.

“Have them fly me over a business class,” I said, “and put me up at” – I named an upscale hotel in Beijing with which I was familiar – “and I’ll be happy to fly over and discuss the findings in the book with them.”

To my surprise, 24 hours later she sent an email back saying, “They will fly you however you want and put you up wherever you would like to stay,” and she named some prospective dates.

My week in Beijing was a touch of the Surreal. I met with some substantial people, including Dr. Wang, one of the key executives of the PBOC, the People’s Bank of China, the country’s central bank. I made some recommendations that would involve both Washington and Beijing and would, I thought, benefit the global economy.

Naïve perhaps but I thought I may as well take advantage of the audience and the opportunity. I didn’t solve all of the world’s financial problems that week, but the suggestions were well received by Dr. Wang.

The most valuable meeting, however, was dinner with the President of China Gold, the 60% government owned gold mining concern in the PRC (People’s Republic of China). China embraces gold, like a mother loves a child, and is the largest gold producer in the world. This guy had 40,000 employees and was also buying up gold mines around the planet like Pac-Man.

Over dinner, emboldened by a little too much baijiu, he smugly shared his intention (and thus the government’s) to try to back the Yuan with gold. (Chinese currency also referred to as the Renminbi). The days of national currency being backed by gold or silver are long gone. All major currencies on the planet today are fiat and have nothing behind them other than the government’s declaration (fiat) that they are to be accepted for the payment of goods and services.

His intention – meaning the government’s – was clear, if China was able to back its currency with gold it would accomplish a long, closely held goal: to replace the U.S. dollar as the dominant currency on the planet with the Yuan. The market price of gold would have to increase for them to accomplish this but if so, they would be able to knock off the dollar as the planet’s go-to currency and replace it with their own. If they were able to accomplish this, the Chinese economy would boom, and the value of the dollar would plummet, causing an economic crisis in the United States.

Fast forward to present time. The price of gold has yet to increase sufficiently to back the Yuan, but Satoshi Nakamoto, the creator of bitcoin, solved the problem for them. Currency could now be digital, which is exactly what is happening.

Cash will be a relic. No more Ben Franklins.

And China, who leads the world’s industrial nations in converting their currency system to digital, is intending that their E-Yuan replace the dominance of the dollar and become the planet’s leading currency.

They don’t need to back the Yuan with gold, they can do this with technology now.

This is not some hypothetical parlor game. This is economic warfare and China is relentlessly pushing forward hoping to achieve global dominance for their currency. They currently have the high ground.

China has been piloting their digital currency in four states. People are paid in digital currency, and shop using the electronic money. One hundred and forty million people have digital wallets for the e-Yuan and as of the end of October 2021, there has been $9.7 billion in transactions using the digital currency issued by the country’s central bank. These are statistics from their pilot program.

The chairman of the PBOC, the People’s Bank of China, has hinted strongly that they will be showcasing the digital Yuan at the Beijing Winter Olympics in 2022.

While China is charging ahead with the development and deployment of their CBDC (central bank digital currency), Jerome Powell Chairman of the Board of Governors of the U.S. Federal Reserve system, and his cohorts at the Fed, sit on their pin striped asses in no apparent hurry to develop a digital U.S. dollar.

Personally, I am philosophically opposed to this whole movement. It will obliterate fourth amendment and whatever remains of the privacy of one’s financial transactions will vanish into Big Brother’s surveillance vortex.

But this is happening. The conversion of the planet’s currencies to central bank issued digital currencies is not some wild conspiracy theory. It is happening as we speak. As a former banker, number one best-selling author on global finance and consultant to governments on these matters, I track the ongoing developments in this so-called digital currency revolution in my newsletter, Strategic Financial Intelligence (www.strategicfinancialintelligence.com).

It is important that you stay informed about this currency revolution because it is happening right now. It will affect your personal finances and that of your business.

You can do that by subscribing to Strategic Financial Intelligence here: https://www.strategicfinancialintelligence.com/product/

I follow the digital currency revolution closely and make investment recommendations for cryptocurrencies that have strong potential for truly handsome capital gains. I also follow and make recommendations for the precious metals markets which will experience strong upside as inflation continues to soar.

Politics aside, you cannot pour trillions of dollars into the economy as has been done, with more to come, without driving inflation to the moon. Precious metals and key crypto currencies will surge accordingly.

It’s two dollars a week to stay informed and to take advantage of these globally shifting markets with investment recommendations . You can subscribe here:

PS: Strategic financial intelligence would be a marvelous Christmas present for those looking for terrific investment recommendations and a better understanding of the global currency revolution currently in progress