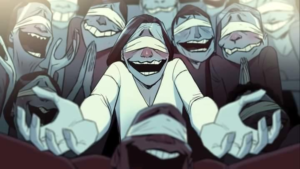 I didn’t write this, just copied and sharing cause it’s DEAD ON!

“And so we enter the phase of the program in which the hypnotized masses beg for their own poisoning.

As this picture beautifully depicts, the people are bursting with hope and gratitude towards their authorities, as they beg for their salvation from the nefarious Germ Monster they’ve been convinced is a dire threat to their precious little lives.

But of course, they’re blind. Blind to the age-old tactic of “Problem, Reaction, Solution,” wherein a crisis is manufactured or exaggerated, generating fear and panic… and then, after the hysteria has been sufficiently prolonged, a miraculous remedy for the crisis arrives.

The success of Problem/Reaction/Solution hinges on controlling the information people receive, and thus what they believe. By the use of sophisticated psychological sorcery dispensed en masse via media propaganda and political theatre, controlling what the people believe has become all too easy… during an age in which we have become disconnected from our own intuition through indulging in endless digital brain-rot.

The blindfold is a metaphor for ignorance, unawareness… the lack of ability to discern what is truth from what is deception and manipulation. The people are incapable of sensing the deception due to a prolonged assault on human consciousness. They are utterly under control and will behave exactly as expected… unless they can awaken from the hypnosis and free themselves from the abusive gaslighting relationship with those they look upon as their caretakers.

Take off the blindfold, wake up and smell the horseshit. Health does not come in a syringe. It has to be EARNED through healthy activity: a good diet, exercise, and perhaps most relevant in this particular Germ Monster charade: close contact with a variety of fellow humans.

What twisted, perverted reality are we living in, when we have been convinced that isolation and avoidance of human contact is healthy?

This does not end with a needle. It ends with you waking up, standing up, and saying “I WILL NOT COMPLY.”