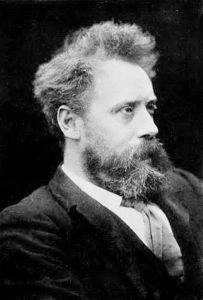 Out of the night that covers me,
Black as the Pit from pole to pole,
I thank whatever gods may be
For my unconquerable soul.

In the fell clutch of circumstance
I have not winced nor cried aloud.
Under the bludgeonings of chance
My head is bloody, but unbowed.

Beyond this place of wrath and tears
Looms but the Horror of the shade,
And yet the menace of the years
Finds, and shall find, me unafraid.

It matters not how strait the gate,
How charged with punishments the scroll.
I am the master of my fate:
I am the captain of my soul.

In addition to the story below, he was much of the time in excruciating pain from tuberculosis o the bone. One leg was amputated from the knee down, and this fact is not mentioned in some biographies. However that is the reason for this poem – he acted like a pirate, talked like one (actually created the pirate personnae we think of pirates today, arrrgh!) and overrode his horrible pain and disability by a thunderous, but poetic and sensitive side that inspired so many creative men and women of his day. No pussy that man.

1. William Ernest Henley was the inspiration for one of the most recognisable characters in Victorian fiction. Henley (1849-1903) was friends with Robert Louis Stevenson, and when Stevenson wrote his first novel, Treasure Island (1883), he was inspired by Henley’s distinctive appearance to create the famous fictional pirate. Henley, who had suffered from tuberculosis from an early age, had his left leg amputated below the knee while still a teenager. Stevenson wrote to Henley that it ‘was the sight of your maimed strength and masterfulness that begot Long John Silver … the idea of the maimed man, ruling and dreaded by the sound, was entirely taken from you.’ Henley, who by all accounts exuded a masculine strength and vigour (and had a large red beard and a hearty laugh – a sort of Victorian Brian Blessed, we might say), thus became immortalised as the one-legged Silver. It would be Robert Newton’s film portrayal of Silver, with the West-Country twang and trademark ‘Aarrrgh!’ cry, that would lead to the modern perception of pirates in the popular consciousness. So, we might say that ultimately we have Henley to thank for International Talk Like a Pirate Day, too.

2. Henley’s daughter inspired another classic figure in children’s literature. Henley’s daughter Margaret – who died of meningitis in 1894, aged five – was the inspiration for Wendy Darling, J. M. Barrie’s character in Peter Pan. Margaret reported referred to Barrie as her ‘fwendy-wendy’, and thus a name was born, and Barrie would immortalise her in his children’s classic. We’ve discussed Wendy Darling – including the popular misconception about the real origin of the name – in this post.

3. His followers were known at the ‘Henley Regatta’. Henley’s name is not as widely known now as it was in his day: during the late nineteenth century he was considered one of the leading Victorian men of letters, with his William Ernest Henleyinfluence even being compared to that of Dr Johnson, whose opinions formed and dominated the previous century’s literary tastes. He attracted many followers and devotees and many big literary figures of the day looked to him for guidance and advice.

4. One of his poems is still remembered and anthologised, however. ‘Invictus’, written in 1875 when Henley was still in his mid-twenties, was originally published in 1888 without its distinctive title (Latin for ‘unconquered’). You can read the entire short poem here. Indeed, the title wasn’t even Henley’s idea, but when Sir Arthur Quiller-Couch, the king of the literary anthology, added the poem to The Oxford Book of English Verse in 1900, he appended the memorable Latin title. The poem introduced a couple of famous phrases into the language: ‘bloody, but unbowed’, and the final two lines: ‘I am the master of my fate: / I am the captain of my soul.’ Like Kipling’s ‘If’, it became popular with readers and has remained popular because it offers a stoic approach to life’s hardships. And we like that sort of thing. The poem was almost certainly inspired by Henley’s loss of the lower half of his left leg: he would remain ‘unbowed’ and ‘unconquered’ by this physical setback. Clint Eastwood’s 2009 film about the 1995 Rugby World Cup in South Africa is named after the poem, and for good reason: Nelson Mandela recited the poem to his fellow prisoners while he was incarcerated on Robben Island.

5. H. G. Wells dedicated The Time Machine to W. E. Henley. Many readers will encounter Henley’s name now in one of two places: in a poetry anthology containing ‘Invictus’, or on the dedication-page of Wells’s first novel, The Time Machine, published in 1895. Henley had published Wells’s novel in serial form in The New Review – one of several publications he edited – and Wells dedicated the one-volume book edition to his editor.

For more information: see the W. E. Henley biography on the Victorian Web. If you enjoyed these facts, check out our interesting facts about Rudyard Kipling’s The Jungle Book.