Last week in the New York Times, the Center for Food Safety ran an ad focusing on the connection between genetically engineered crops and cancer.
The World Health Organization designated glyphosate (the active ingredient in the herbicide Roundup) a probable carcinogen to humans.
The International Agency for Research on Cancer (IARC) is the division of the World Health Organization that released the report. IARC is one of the world’s leading authorities on cancer.
Today in the United States, cancer is the leading cause of death by disease in U.S. children. The President’s Cancer Panel reports that 1 in 2 men and 1 in 3 women (41% of Americans) are expected to get cancer in their lifetimes. Correlation is not causation, but a correlation of this magnitude merits further independent investigation.
The California EPA is working to label glyphosate, the active ingredient in Roundup, as a carcinogen. Almost all GMOs are designed to be used in conjunction with glyphosate, some are called “Roundup Ready” and have been genetically engineered to withstand increased applications of these ingredients.
So the next time you hear GMOs are “safe,” think about the cancer-causing potential of spraying food crops with nearly 300 million more pounds of glyphosate this year, think about “Roundup Ready” crops and the fact that they are labeled for over 60% of the world’s population but not here.
http://robynobrien.com/genetically-engineered-food-and-cancer/ 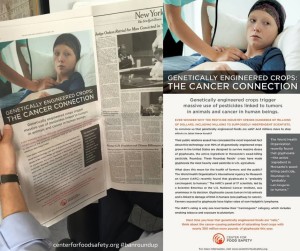