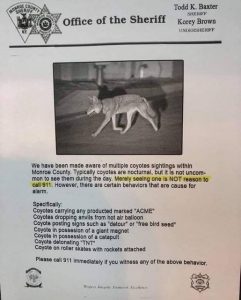 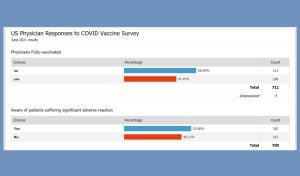 Of the 700 physicians responding to an internet survey by the Association of American Physicians and Surgeons (AAPS), nearly 60 percent said they were not “fully vaccinated” against COVID.

This contrasts with the claim by the American Medical Association that 96 percent of practicing physicians are fully vaccinated. This was based on 300 respondents.

Neither survey represents a random sample of all American physicians, but the AAPS survey shows that physician support for the mass injection campaign is far from unanimous.

“It is wrong to call a person who declines a shot an ‘anti-vaxxer,’” states AAPS executive director Jane Orient, M.D. “Virtually no physicians are ‘anti-antibiotics’ or ‘anti-surgery,’ whereas all are opposed to treatments that they think are unnecessary, more likely to harm than to benefit an individual patient, or inadequately tested.”

The AAPS survey also showed that 54 percent of physician respondents were aware of patients suffering a “significant adverse reaction.” Of the unvaccinated physicians, 80 percent said “I believe risk of shots exceeds risk of disease,” and 30% said “I already had COVID.”

Other reasons for declining the shot included unknown long-term effects, use of aborted fetal tissue, “it’s experimental,” availability of effective early treatment, and reports of deaths and blood clots.

Nonphysicians were also invited to participate in the survey. Of some 5,300 total participants, 2,548 volunteered comments about associated adverse effects of which they were aware. These included death, amputation, paralysis, stillbirth, menstrual irregularities, blindness, seizures, and heart issues.

“Causality is not proven. However, many of these episodes might have resulted in a huge product liability or malpractice award if they had occurred after a new drug,” stated Dr. Orient. “Purveyors of these COVID products are protected against lawsuits.”

Majority of Physicians Decline COVID Shots, according to Survey 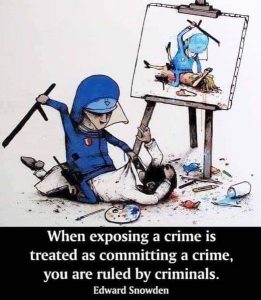 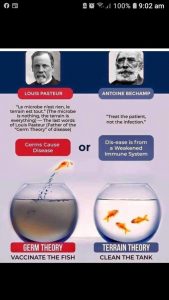 I read someone who claimed to have looked and found zero evidence of this assertion that Pasteur did a 180 degree on his germ theory but the distinction between two alternatives is a very valid portrayal.

If you refer to my recent post (https://www.tomgrimshaw.com/tomsblog/?p=33670) about the number and variety of germs found on masks children had worn despite the fact that the children were still at school shows that if you have a good immune system (uncompromised by poor diet and destroyed by ADE from vaccines) you may encounter germs without falling ill. 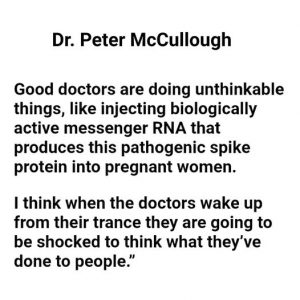 Dr. Peter McCullough has boldly acted with courageous strategic leadership throughout the pandemic to help save many lives. He is a true hero who has been in the trenches helping us organize life-saving operations across the U.S.

Please listen to what he has to say here:
“I can’t come and say this on national TV today or at any time.”

“What we learned over time is that we are under the application of a form of bio-terrorism that’s worldwide, that appears to have been many years in the planning.

The first wave of the bio-terrorism is a respiratory virus that spread across the world. It affected relatively few people, about one percent of many populations, but generated great fear.

The virus was responsible for deaths primarily in the frail and elderly, but in otherwise well people it was similar to the common cold, but that fear was used very quickly and surprisingly to generate tremendous influences in human life – lockdowns and all you know about.

Every single thing that was done in the public health response to the pandemic made it worse.

Even the lockdowns made it worse because the virus evolved over time to become more contagious, so every single response made it worse.
As a doctor, I thought the virus was going to be pretty easy to treat. Once we understood the three phases, the viral replication, the cytokine storm and thrombosis.

As I promulgated early treatment I started to meet resistance at all levels, in terms of actually treating patients and then publishing papers.

I’m the editor of two major journals. So, fortunately, I had enough publication strength to publish the only two papers in the entire medical literature that teaches doctors about how to treat COVID-19 at home to prevent hospitalization in death.

We did the best we could without any government funding or support.

We demonstrated that it results in about an 85% reduction in hospitalization and death.

What we discovered is that the suppression of early-treatment was tightly linked to the development of a vaccine. The entire program, in a sense bio-terrorism phase one was rolled out, it was really all about keeping the population in fear and isolation, preparing them to accept the vaccine, which appears to be phase two of a bio-terrorism operation.

The respiratory virus and the vaccine deliver to the human body the spike protein, the gain-of-function target of htis bio-terrorism research.

Now I can’t come and say this all that on national TV but we learned over time that we could no longer communicate with government agencies. We actually couldn’t even communicate with our propagandized colleagues in major medical centers, all of which appeard to be under a spell, almost as if they are hypnotized right now.

I think when doctors wake up from their trance they are going to be shocked to think what they have done to people.

Team Life-Saving
Dr. McCullough also briefly summarized what had to be done to actually treat patients with the life-saving medicine that they needed, despite the government’s systemic attempts to suppress our efforts:

“Our strategy was to organize, there are many groups, one group in the United States called C-19 that I organized, it’s about 1000 people. Another is called FLCCC, the Frontline COVID-19 Critical Care Alliance. Another worldwide one is called PANDA. There is also HEART and BIRD and COVID Medical Network. Treatment Donno Solari in Italy. It’s gotten to the point where people in the UK and Germany rally for early treatment.

The governments have actually tried to block any single milligram of treatment to individuals.

We decided by the summer that we had to take our message to the people.

We had one physician association that worked with us called the Association of American Physicians and Surgeons.

We created a home patient guide and we organized the United States into four national telemedicine services, 15 regional services.

We broke through to the people, and the people who got sick with COVID-19 who called in got medication prescribed to local pharmacies or to mail order distribution pharmacies.

Without the government really even understanding what was going on we crushed the pandemic curve in December and January.

We basically took care of the pandemic with 500 doctors and telemedicine services.

To this day, we treat about 25% of the U.S. COVID-19 population that actually are at high risk, over age 50 with medical problems or present with severe symptoms, and we basically handled the pandemic.

At the same time, we tried to keep ourselves above the political fray.

We understand that the suppression of early treatment is tightly linked to vaccination. Then, we had all the news on vaccination come out, and we are working to change the public view of the vaccine. The public initially accepted the vaccine.

We had to slowly turn the ship.

Now in the United States rates of vaccination have been dropping since April 8th. They continue to drop every day.

The vaccine centers that I go by are completely empty.

In the United States they are becoming desperate to convince individuals to get a vaccine. They are offering million-dollar lotteries. The universities who are trying to force vaccination are getting resistance.

I’m the lead expert in the Bellwether Houston Methodist case, which is currently being argued before a judge in Texas. It is going to be quickly escalated to the Supreme Court of Texas.

The Houston Methodist hospital is a leading hospital. They are attempting to force their employees to receive the vaccine. We already have word that it is going to be escalated to the Supreme Court. It’ll be a very high visibility case.

We have a lot of activity going on in the United States.

We are engaging more and more attorneys and it is great to have you and your team involved.” 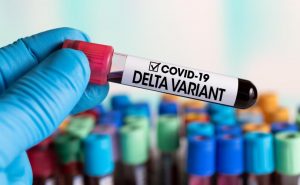 (Tom: This risk was known about and the result predicted years ago.)

The death rate from the Delta COVID variant is six times higher among those who were fully vaccinated for two weeks or longer than among those who never received a shot, according to data published by Public Health England on Friday.

Both death rates among the unvaccinated and vaccinated are exceedingly low (less than one percent of all positive tests) for a variant that Public Health England describes as the “dominant variant” in the UK, comprising “91 percent of sequenced cases.”

Antibody-dependent enhancement?
“This is reminiscent of the ADE (antibody dependent enhancement) phenomenon that has been seen for other vaccine and that has been expressed as a point of concern among many scientists for the COVID vaccines,” Stephanie Seneff, a senior researcher at the Massachusetts Institute of Technology’s Computer Science and Artificial Intelligence Laboratory told LifeSiteNews.

Seneff said research has shown that coronavirus vaccines alter the ways immune systems respond to infection and can activate other sleeping infections in the vaccinated person such as herpes virus, creating symptoms of Bell’s palsy or shingles.

“It is conceivable to me that the laser-beam specificity of the induced antibodies is offset by a general weakening of innate immunity,” Seneff said.

“I also suspect that massive vaccination campaigns may accelerate the rate at which the vaccine-resistant mutant strains become dominant among all the SARS-Co-V2 [coronavirus] strains.” 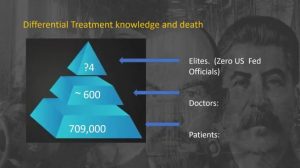 From the talk ‘Authoritarianism Is The Most Deadly Virus: Dr. Lee Merritt’ 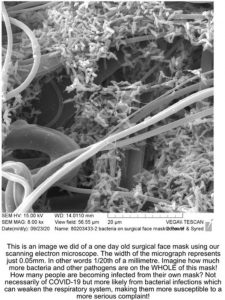 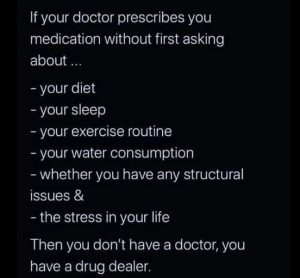 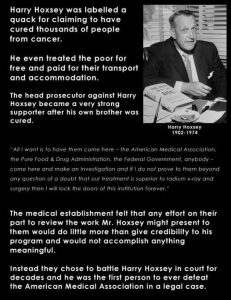 In remarkable historical footage here is the stranger-than-fiction story of Harry Hoxsey. He was a former coal miner who, in 1924, began to operate a number of successful cancer Clinics using an herbal remedy handed down by his grandfather. A gigantic battle between Hoxsey and the newly-formed AMA raged from 1924 to 1960, with much of it played out in the courts and media.

There was little doubt that Hoxsey was curing cancer, because there were too many recovered patients willing to testify on his behalf. In the end, however, the FDA was brought into the act and closed Hoxsey down. Eventually, Mildred Nelson, one of his former nurses, took the treatment to Tijuana, Mexico.

A wrenching documentary about Harry Hoxsey whose great grand-father’s herbal cancer ‘cure’ was credited with saving thousands of lives at his clinics across the United States until government medical authorities shut him down in the ’50s.

Hoxsey’s work continues in exile in Mexico, and claims a success rate of 80%. They couldn’t shut him down nor suppress his information.