A recent study has found that alcoholic women appear to die at approximately twice the rate of alcoholic men.
http://www.jonbarron.org/article/alcoholism-may-be-more-dangerous-women

In this time to heightened strife in the Middle East, I thought this would be pertinent to remember…Joe

The core design of the humble umbrella hasn’t changed in centuries. The main reason for this being that the umbrella, as humble as it may be, works extremely well. Until someone designs a new version of the umbrella that actually offers some real advantages over its forebears, people are going to continue to use those already on the market. However, very few people would consider the umbrella to be perfect, which presents creative and inventive designers with several problems in need of solutions. Rain Shield solves several of these problems in one innovative hit.
http://www.gizmag.com/rain-shield-umbrella/25038/

(from an HSI Newsletter)
Dear Reader,
Ignorance is not bliss. Not even close. Ignore potential danger, and bliss does not follow.
Virtually all drugs have one type of danger — adverse side effects. But Gardasil, the human papillomavirus (HPV) vaccine, has an additional danger: misinformation.
That’s why nobody should EVER tell a young woman who’s received this vaccine that she’s blissfully free of cervical cancer danger.
You might as well send her off to go dance in a minefield.
Get real
Recently, I told you about a new Gardasil study. Supposedly, it puts parents’ fears to rest.
Here’s how the “fear” thinking goes… Girls get the vaccine. Doctors tell them it protects against sexually transmitted HPV. Released from HPV fear, the girls think they are protected from other sexually transmitted diseases.
The flaw in the study is glaring. Researchers examined sexual activity among the LEAST sexually active age groups.
Hmmm. Do you think that “flaw” might have been intentional? It certainly produced Gardasil-friendly results.
Even though this is a rubber-stamp study, it bugs Lindsay Abrams — a columnist for The Atlantic magazine. Abrams is irritated that such a study is even necessary. The article’s headline sums up her take on the vaccine…
“Can We Just Vaccinate Our Kids Against HPV Already?”
In her article, Abrams totally buys the “fear” study results. She says the vaccine doesn’t turn girls into “sex maniacs.” AND, she adds, “It protects from cancer.”
Then she goes one step further. She states that the “real comfort” should come from knowing that when vaccinated girls grow up, “they’ll have one less thing to be threatened by.”
Pure hogwash.
More importantly, that’s a reckless message.
Laying down the facts
Gardasil is not a cancer shot. End of story. It’s supposed to protect against some strains of HPV. In other words, a girl can get the vaccine and still get cervical cancer.
So if you tell girls and young women that they have “one less thing to be threatened by,” they might feel it’s not necessary to get an annual Pap smear. As I’ve mentioned before, that’s the ONE guaranteed way to reduce cervical cancer deaths.
A pap smear reveals cervical cancer in the earliest stage when it’s least dangerous and highly treatable. If a woman passes on the Pap smear because she believes she has some kind of a cervical cancer shield, she literally puts her life at risk.
The message from our side remains clear: Gardasil is not a risk-free silver bullet that defeats cervical cancer… neither is it safe and side effect-free.

This morning I received dozens of emails to invalid addresses on my domain with a zip file attachment. They purported to be from Telstra. The message was:
You have received a picture message from mobile number +61474687472
To save this picture, please save attached file.
If you get one I recommend you do not open it.

Received this from one of my programming buddies. I use Format Factory. It is the Swiss Army knife of conversion programs and will convert anything to anything. Can even do images.
http://format-factory.en.softonic.com/

“I strongly recommend that every American acquire some basic knowledge of economics, monetary policy, and the intersection of politics with the economy. No formal classroom is required; a desire to read and learn will suffice. There are countless important books to consider, but the following are an excellent starting point: The Law by Frédéric Bastiat; Economics in One Lesson by Henry Hazlitt; What has Government Done to our Money? by Murray Rothbard; The Road to Serfdom by Friedrich Hayek; and Economics for Real People by Gene Callahan.
“If you simply read and comprehend these relatively short texts, you will know far more than most educated people about economics and government. You certainly will develop a far greater understanding of how supposedly benevolent government policies destroy prosperity. If you care about the future of this country, arm yourself with knowledge and fight back against economic ignorance. We disregard economics and history at our own peril.”
—Ron Paul, Representative from Texas 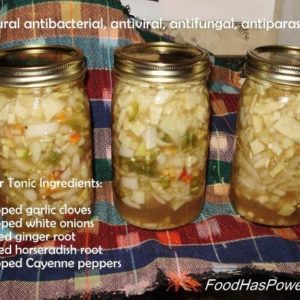 Instructions on how to make it at:
heal-thyself.ning.com/profiles/blogs/master-tonic-101

Mice fed an antioxidant found in green tea — epigallocatechin-3-gallate, or EGCG — and corn starch had a significant reduction in increase in their blood sugar — blood glucose — levels compared to mice that were not fed the compound, according to Joshua Lambert, assistant professor of food science in agricultural sciences.
The spike in blood glucose level is about 50 percent lower than the increase in the blood glucose level of mice that were not fed EGCG,
http://www.eurekalert.org/pub_releases/2012-11/ps-dgt110812.php