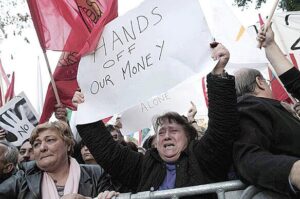 Ask Anthony Albanese: why are you protecting Scott Morrison instead of our bank deposits?

Opposition leader Anthony Albanese is more intent on protecting Prime Minister Scott Morrison’s position on “bail-in” than Australians’ deposits. Why? Call him today to demand he stop protecting Morrison and instead support the Banking Amendment (Deposits) Bill 2020 to explicitly protect Australian bank deposits from any sort of bail-in. Unless he does, this is now Labor’s bail-in—if Labor refuses to oppose the government on important banking policies, they will be held to account.

As Citizens Party Research Director Robert Barwick told Digital Finance Analytics’ Martin North on a 23 November Walk the World episode, It’s Deposit Bail-in “D” Day, the Banking Amendment (Deposits) Bill 2020 that Senator Malcolm Roberts introduced in February cuts through the arguments over whether bail-in is possible by making the law explicit that deposits can never be bailed in, to remove all doubt.

Bail-in is the policy devised by the Bank for International Settlements (BIS)-based Financial Stability Board (FSB) under orders from the G20, which in 2009 charged the FSB with developing a way to resolve future financial crises without the need for taxpayer bailouts of banks. The FSB’s solution was to propose that banks should be “bailed in” instead of bailed out, by confiscating the funds of the banks’ “unsecured creditors”, including depositors. Labor was in government in Australia at the time, and then-Prime Minister Kevin Rudd took credit for persuading the world to adopt a coordinated policy approach through the G20.

Labor was still in government in 2011 when Australia joined the rest of the G20 in endorsing the FSB’s finalised bail-in policy, laid out in its blueprint called Key Attributes of Effective Resolution Regimes, which is explicit that bail-in applies to bank deposits. And Labor was in its final months of government in April 2013—the month after the first bail-in was imposed on depositors in Cyprus—when the FSB noted in a report that “bail-in legislation is in train … in Australia”.

In other words, it was a Labor government that made a commitment to the G20 and FSB to enact bail-in legislation in Australia! They share culpability with the Coalition government. Although Labor have been out of power in the seven years since 2013, the Labor Party has aided and abetted the Coalition government in implementing bail-in powers, and now they are protecting Morrison’s efforts to block Senator Roberts’ bill to clarify the law so bail-in can’t happen.

In a 23 November letter to a concerned citizen, Anthony Albanese’s office lied to protect the government.

“The Banking Amendments (Deposits) Bill 2020 has been extensively examined by the Senate Economics Legislation Committee”, Albanese’s letter stated. “Following an extended inquiry, with submissions from many stakeholders, the Committee found that the Bill would not provide any additional protections to Australian deposit holders. As a result, Labor will not be supporting the Bill.”

First, the Senate Economics Legislation Committee did not “extensively” examine the bill. In fact, the Committee did not even hold a public hearing, at which Senators would have been able to question experts who were willing to testify about the risks of bank deposits being bailed in. One of the experts who should have been questioned in a public hearing was none other than the former Policy Director of the Australian Banking Association, Nick Hossack, who is also a former advisor to Liberal doyens John Howard and Alexander Downer. “Senator Roberts has identified uncertainty in the Banking Act 1959 over whether bank deposits can be written off or converted to equity”, Hossack wrote in his submission to the Senate inquiry—specifically contradicting the claims of the government, echoed by Labor, that the law is already certain.

Second, the Albanese letter lied that deposits are already protected by the $250,000 Financial Claims Scheme guarantee and the Roberts’ bill “would not provide any additional protection”.

What a load of rubbish!

When Labor was in government and enacted the FCS guarantee, it hid the fact that both the Council of Financial Regulators, chaired by the Reserve Bank, and the Financial Stability Board had noted that the FCS was useless for protecting 80 per cent of Australian bank deposits—namely the deposits in the Big Four banks—because the $20 billion provision per bank could not hope to cover the hundreds of billions of deposits in each of the Big Four. Labor also legislated that the FCS must first be “activated” upon the failure of a bank, and that the decision to activate is at the discretion of the government. So it is not an active guarantee, and it does not automatically pay out, as per Labor’s design.

So much for Labor’s idea of deposit protection!

But to say that the Roberts bill would not provide additional protection is a bald-faced lie. The Banking Amendment (Deposits) Bill 2020 would insert an explicit provision that deposits can never be bailed in, no way no how. No such explicit protection against the specific policy of bail-in exists right now. By definition, this is “additional protection”; in fact, it is a level of protection seldom seen in legislation—it is iron-clad and watertight, with no possibility of loopholes.

If you want a watertight protection against bail-in for your savings, call Anthony Albanese, the other relevant Labor leaders, and all your Senators this week to demand they support Senator Roberts’ bill on 30 November.

In six days the Senate votes on Senator Malcolm Roberts’ Banking Amendment (Deposits) Bill 2020, which would end the threat that Australian bank deposits could be “bailed in” once and for all. The government wants you to take them at their word that deposits won’t be bailed in, but that’s not good enough—the assurance is worthless unless it is written into the law. Therefore, it’s very important that in the next six days you call all the Senators from your state, your local federal MP, and Labor leader Anthony Albanese, deputy leader Richard Marles, and Shadow Assistant Treasurer Stephen Jones to demand they vote for the Banking Amendment (Deposits) Bill 2020.

Ask the Labor leaders: “Why would you protect Scott Morrison on bail-in, instead of making the law explicit that deposits can never be bailed in?”