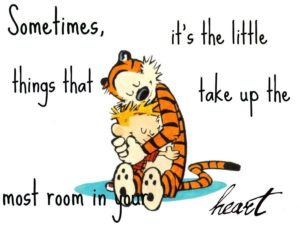 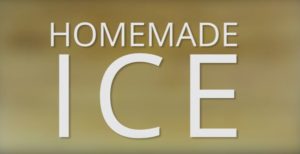 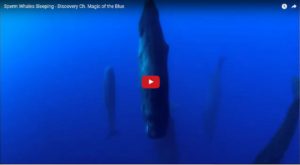 Whales and dolphins do not breathe autonomically like humans so have to have some part oftheir brain awake when the other part is asleep!
http://www.onegreenplanet.org/news/amazing-footage-of-sperm-whales-sleeping-vertically-video/ 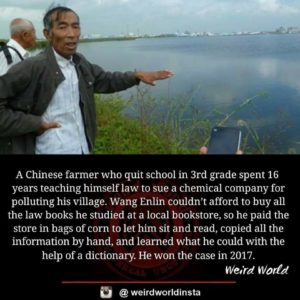 Now THIS guy is an Every Day Hero! Not many stay the distance for 16 long years to secure a single victory.
http://www.independent.co.uk/news/world/asia/chinese-farmer-wang-englin-study-law-16-years-chemicals-corporation-qinghua-group-dump-chemical-a7566911.html 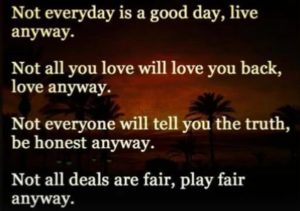 It might be good for those around you but it is even better for you!

Some people use the word ignorant as an insult.
And if it is used related to an area about which you are knowledgeable, it could be taken as an insult.
But the truth is, I’m ignorant.
You’re ignorant.
Everybody on earth is ignorant.
About more things than you can mention.
There is so much to know, you cannot know it all.
You can never not be ignorant about something.
The intelligent thing is to decide what you need to know and what you don’t need to know.
To identify about what things you can afford to be ignorant, and what you can’t.
To make a conscious decision to “not know” certain things.
And to make an effort to acquire the knowledge and knowhow that you decide is important for your survival.
And that has to be different for everyone.
And different at different times in your life.
For instance at present I can safely “not know” how to show a horse.
But don’t advise that to someone who keeps horses.
Now some of the “I should know that” topics are pretty common to all of us.
How to take care of a body.
How to manage oneself.
How to focus and persist.
How to relax and unwind.
How to resist the urge to be dishonest or unethical.
How to spot who you can trust and who you can’t.
How to spot a person who would lead you astray and how to decline their manipulations and stay out of trouble.
How to build the courage to do what is right regardless of how uncomfortable it is.
How to communicate appropriately to others.
How to understand our fellow man.
How to maintain our liking for our fellow man despite all invitations to not do so.
How to earn enough to provide for ourselves and our family.
I guess this train of thought came about because my purpose in life is to understand.
So I could quite happily spend all day reading and sharing with people what I learned.
But there are other things to be done.
A dog to be walked.
Meals to be prepared.
A body to be exercised.
Groceries to be fetched.
Bills to be paid.
A living to be earned.
And because there are only so many hours in the day that force one to prioritise one’s time, if we are to be maximally effective we need to prioritise our learning.
To be continued… …but in the mean time… …start to compile a list of what subjects, topics and areas of life you personally wish to know more about.

So…the tetanus shot…
Story from a mom who took her (vaccine free) child to the emergency room with a cut:
Doctor: “We’re going to give her a tetanus vaccine.”
Mom: “Really? What brand and configuration did you have in mind?”
Doctor: “Just Tetanus.”
Mom: “You mean the DTaP?”
Doctor: “Well, yes.”
Mom: “So, you want to give my child a vaccine for 3 diseases when you’re only concerned about one?”
Doctor: “It’s the only way it comes.” (wrong)
Mom: “So…how long will it take for the vaccine to help her create antibodies against tetanus?”
Doctor: “About 3 weeks.”
Mom: “If this wound contains tetanus spores in the correct environment, how long before the spores start producing toxins causing lockjaw then death?”
Doctor: “Immediately.”
Mom: “So you want to give her a vaccine that she won’t mount an immune response with until about a week after she’s dead, then?”
We left without the shot or TiG…
Scares me that I have more information than a physician.
It should scare you, too. — Dee Resnick Forlano
Fun facts on tetanus that clearly most doctors don’t know (or lie about) since they give the DTaP vaccine for even sinus infections and any minor cut:
1. Tetanus is an anaerobic bacteria meaning it can’t survive in oxygenated environments meaning if the wound bled, NO tetanus.
2. Just because you get cut on metal (rusty or not), it doesn’t automatically mean tetanus bacteria is present. Tetanus is normally found in manure/dirt and not on a clean plumbing fixture.
3. Even if there was a deep puncture wound that did not bleed, caused by an object that had tetanus bacteria on it, you literally can NOT “vaccinate” against a bacterial infection AFTER the exposure. The vaccine is not an instant tetanus killer; it would take weeks for your body to produce enough antibodies (provided the vaccine is even successful at all).
4. If there were serious concerns about tetanus exposure (as previously explained) then the ONLY thing that could help (outside of allowing the wound to bleed, if possible, and cleaning the wound with soap, water, or hydrogen peroxide) would be the TiG shot (tetanus immunoglobulin), which is an anti-toxin and not a vaccine.
5. There is no “tetanus vaccine” available in the United States, only the DTaP which is a 3-in-1 cocktail vaccine consisting of Diptheria, Tetanus & Pertussis (whooping cough) or Td (tetanus and diphtheria).
To summarize:
1. A tetanus shot would not help a current case of tetanus as a vaccine takes several weeks to create antibodies. If a current case of tetanus is truly a concern, the TiG shot is what should be given.
2. According to the VAERS database, reactions to vaccines for tetanus and diptheria are not rare. As of August 2012, there were over 22,000 adverse reactions reported and 67 deaths.
3. Lastly, the CDC states that efficacy of the tetanus toxoid has never been studied in a vaccine trial.
Copied and pasted, please feel free to do the same!? 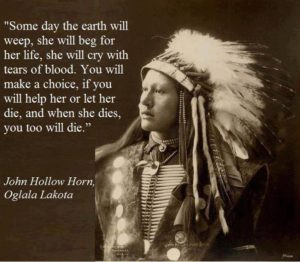 We each of us are continually choosing our future.
Our individual decisions combine to make a collective one.
Our actions decide our fate.
The thoughts we think, the decisions we make and the actions we take all combine to co-creates the future.
Either consciously and deliberately or unthinkingly, every thought we think, every dollar we spend and every action we take are a vote for the future.
How did you vote last week?
How will you vote next week?
Come off automatic and make calculated, pro-survival decisions and choices before you vote, with your thoughts, your dollars and your actions.
Both your future self and the planet will thank you for it.

Worth watching!
Not just from my say so.
I have had a few reports that it is fantastic data!
https://go2.thetruthaboutvaccines.com/docuseries/replay/

The study is particularly noteworthy because it was a double-blind placebo-controlled trial—and the researchers used saline solution, a genuinely inactive placebo, as a stand in for the trivalent flu vaccine. Most vaccine trials utilize active placebos, which are substances that include ingredients used in the vaccines, making the studies meaningless—though this fact is almost never revealed in the writeups.
http://yournewswire.com/flu-vaccine-causes-5-5-times-more-respiratory-infections-study/