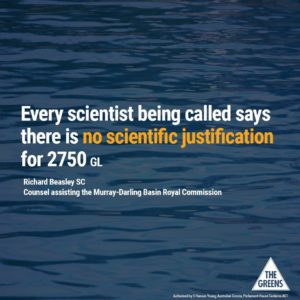 The Murray Darling Royal Commission happening in South Australia this month is painting a dark picture of how the Murray Darling Basin Plan came to be. We’ve heard shocking statements from scientists from the Wentworth Group, the CSIRO and ex-Murray Darling Basin Authority staff. But it is Richard Beasley SC, Counsel assisting the Commissioner, who summed it up perfectly:
The scientific community knew at least 4000GL was needed to be returned to the river to give it a fighting chance. Despite this, as former MDBA water planner David Bell told the commission, the final figure of 2750GL was plucked out of the air to be more politically palatable. “The general consensus [within the MDBA] became that the SDL had to be a number beginning with ‘2’,” he said.
His evidence at the Commission called into question the Murray Darling Basin Authority’s independence, showing the organisation could not be trusted to implement the Murray Darling Basin Plan.
Former CSIRO scientist Dr Matthew Colloff said the MDBA’s interference throughout the course of developing the plan “compromised” the CSIRO’s scientific integrity, and undermined their independence.
Former MDBA environmental water director Maryanne Slattery told the commission the Basin Plan numbers no longer represented actual water.
The Authority has also been described as a “politically motivated” organisation, which had developed a “dishonest culture” just this week.
It comes as little surprise that the Murray Darling Basin Plan was not underpinned by reliable scientific advice at the time, but what is shocking is that the Liberal Government and the Murray Darling Basin Authority are attempting to hide from the Royal Commission’s scrutiny. They have shamefully applied to the High Court to block Government and MDBA officials from having to appear at the Royal Commission.
We can see there is not enough water coming down the River by looking at the dying Coorong, and the dredges at the Murray mouth. River communities are already seriously concerned that they are on the cusp of the next big drought.
River communities, and we South Australians at the bottom end of the river, expect more than this, and deserve better.
Let’s keep fighting for a thriving River.
Sarah Hanson-Young.

Sums it up perfectly, really. The Murray Darling Basin Plan is broken, and as the Royal Commission in South Australia…