Section 44 of the Australian Constitution forbids anyone holding dual citizenship from being elected to Parliament. Tony Abbott’s refusal (under FOI request) to provide his Form RN renouncing his British citizenship before being elected (26 March 1994), raises serious questions about his legality as a Member of Parliament. Openness and transparency are vital and we don’t need or want, and cannot tolerate an MP (far less a Prime Minister) in breach of the founding laws of our country – the only set of laws of Australia that cannot be changed by the Government of the day
https://www.change.org/p/tony-abbott-show-us-your-papers-renouncing-your-british-citizenship-before-you-were-elected 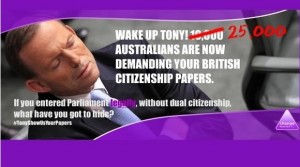